We are just now leaving the massive parking lot from the game at Dodgers Stadium. The game was not too bad, but we certainly were not impressed with the park due to our seats. I did not mind overall, as the seats were right were we entered the park and the handicap parking was literally right in front of the entrance to the area we sat in.

The main issue, though, was it being a cross town game and the crowd being louder and more over the top than usual, which really pissed Mik off. He is barely into this trip in the first place, so it really does not take much to make him throw a fit about us staying until the game is over. It certainly did not help the game did not end with 9 innings. At least it was only 10 innings, but it was kind of a pathetic ending with them winning with a walk bringing in the winning run.

Despite the less than dramatic actual end to the game it was a good game. The Dodgers took an early 1-0 lead in the first. The Angels later tied it up with a home run in the fourth. They then scored three in the fifth to lead 4-1. The Dodgers quickly closed to gap to 1 with 2 runs in the bottom of the fifth. They then tied it up in the bottom of the 8th.

Mik might have hated the extra inning of the game and well actually kind of hated the last three innings once he stopped playing his DS and let the noise get to him. I on the other hand liked seeing an extra inning game, but would rather have seen the Angels win. Mik would have liked that, too, since the Dodgers in the lead in the division his Dbacks are in, but he was just relieved to have the game over in the end. At least borrowing my phone learning his Dbacks won while the 10th inning was going on got him to behave the last few at bats of the game.

Tomorrow should be a good day for him with no baseball. Of course, I love Disneyland, too, but I am also loving the baseball games despite the poor handicap seats at Dodger Stadium.

Day 4: Mik Chilling Before We Leave for Game 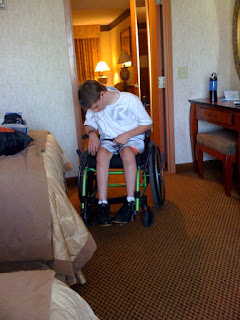 We left San Diego around noon today after Mik had to go to Best Buy to
get the movie Cars, which ended up being on sale with a free poster.
Drive up to Anaheim was good with only one little slow spot on I5. Mik
enjoyed stopping at Del Taco for lunch.

We got checked into our first of only two hotels we are staying at
during the trip. We can see Angel Stadium off in the distance from
our room, but that stadium is not on the plan until Monday. We are,
however, seeing the Angels at the Dodgers tonight. We are chilling in
the room for now and plan to leave for Game 3 in about half an hour.

Will try to get the posts for today's ballpark and game tonight done
on the drive back to the hotel. There will not be any time for it in
tomorrow morning like there was today, as we are heading to Disneyland
early to celebrate Dad's 50th birthday tomorrow.

At the game last night we got a Padres sticker to add to the National League side of the car. Dad put it on right after the game before we even left the parking garage, but I did not get around to taking a photo of it until this morning. I still forgot to take a photo of the lettering on the back of the car, but it is basically just the All the Ballparks 2009 Road Trip lettering because Dad messed up on one side and when he ordered new lettering it came with two sets of it.

Update: I now realize it is kind of hard to tell with the little thumbnail photo that it is there above the red Dbacks one. It is clearer if you click on the photo to see the larger version of it. The Padres one is actually pretty fancy in comparison to the simple Dbacks one.

PetCo Park can be a pain in the butt with a wheelchair if you do not know where you are going. Last summer we ended up having to go up and down a bunch of elevators before finally go up one of the long ramps to the section. That section happened to be one over from the one we sat at last night. This time we had no problem, though, because the ticket taker actually asked us if we knew where we needed to go and when we said no she gave us very clear instructions.

To get to 229 we just had to walk straight along the Park in the Park area behind the outfield to the first elevator under the stands. It is actually a very straight shot from where we entered the park by the Team Shop. Last time, though, we ended up in the first elevator by the Team Shop and then on a Club Level, where you cannot go through if you do not have tickets for that level and just keep getting crap round and round directions to our seats.

The seats in 229 were good. They are up above some rows in the section, but you cannot even tell there are any below you. The view of the field is also very good since the bar in front of the seating is low enough not to be in the line of sight. Plus the location was great for being on the other side of the wall from the bathrooms and the concession stand, which being an All You Can Eat section we kept sending Dad back to to get food and soda.

Since we sat in the All You Can Eat section Mik did a lot of eating at PetCo Park. The only food we had to go to another section to buy was the trademark food, fish tacos, and Dippin' Dots in the mini helmet. It certainly was a great deal since the tickets were not that much more expensive than the cheapest handicap seats without the All You Can Eat option.

Mik started with nachos. He says that was his favorite item he tried at the PetCo Park. They were basically just regular nachos, but they were good.

Next Mik moved on to a hot dog. I even had two veggie dogs. Mik liked the hot dog.

I had Dad get me Dippin Dots to get my mini helmet for the Padres. I ate a little of it before Mik decided he wanted Dippin Dots and I let him finish it off so Dad did not have to go back down and buy another. He declared it nothing special since Dippin Dots are at several sports venues, but still good.

Next Mik had his fish taco. He was disappointed in it. He says the fish was good, but he did not like that it was made with a corn tortilla and cabbage instead of lettuce.

From the All You Can Eat section we had some ice cream treats. It was kind of chilly at the game, but it is hard to pass up "free" ice cream. Dad had an Eskimo Pie, I had a Drumstick, and Mik had an ice cream sandwich.

The one other thing we tried was the popcorn. It was good popcorn. Even Dad did not think it was too salty.
Posted by wildcat1001 at 8:38 AM No comments:

The mini bat selection has not been all that interesting so far on the trip besides finding the '09 World Baseball Classic one. Most of Mik's collection is buried in the garage and we could not confirm what ones he had before the trip, but we knew he already had either a natural wood or dark blue Padres logo one. Thus the choices were either this light blue one or a pink one. Obviously, Mik went for the light blue one. All of them just had the same San Diego Padres logo. When we found the 40th Anniversary Ball for my collection we had hoped there would be a mini bat with that logo, too.
Posted by wildcat1001 at 7:28 AM No comments:

I am mostly trying to collect souvenir balls with the ballparks name on them on the trip. I could not find one at PetCo Park and that did not matter too much to me anyways, as I do have a Inaugural Year PetCo Park ball in the part of my collection currently sitting in storage. I ended up getting the Padres 40th Anniversary Year ball, since it is specific to this year. It has a Friar batting Padres logo that says Anniversary Year on top, has 40th in a home plate symbol, and says the years 1969 and 2009. Even if they had had a PetCo park ball I still would have chosen this one.
Posted by wildcat1001 at 7:22 AM No comments:

Last night we saw Game 2 of the trip. Game 2 was overall a great experience considering the circumstances. For one Petco Park is just not one of the better ballparks and we know that having been there inaugural year and last summer. Secondly the Cubs lost. That is the end of the bad list, as even Mik was for once very well behaved.

The seats in 229 in the All You Can Eat section were great and sure there was a bar in front of the seats, but it was not in the line of site at all like at the Diamondbacks game. The seats are located in the upper level behind right field and while a small part of center and right field (mostly warning track) cannot be viewed from the seats there were not any plays in that area during this game, so it was not really a noticeable issue. Not to mention that is very typical of seats in this type of location in any ballpark.

The All You Can Eat part was awesome. The veggie dogs were significantly smaller than the regular hot dogs, but they were still good and it does not really matter when you can get as many as you want. It was nice they also had some Nestle ice cream treats as part of it. More on the food to come in a Mik's Food Review post later (he's still sound asleep), though, including his verdict on the fish tacos.

The game itself was of course disappointing since the Cubs lost and Dad and I like the Cubs. Most sad is the first run was scored in the first inning without the Padres even getting a hit. Zambrano walked two and hit a batter with a pitch to load the bases with one out and then the Padres' Kouzmanoff hit a sac fly to center field to score the first run. The Cubs did get on base a good amount of times including loading it in the 9th, but they just could not get a run in. It did not help that the Padres pitchers combined to get 16 of the 27 outs of the game by striking out Cubs batters. It also happened to be the first time the Padres have shut out a team at home this year.

Below are a few of the photos from the game. You can see the rest in the album for the game by clicking on any of the ones below.