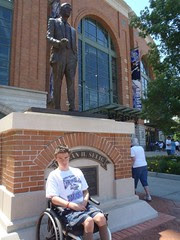 We did not plan to end up going to Miller Park this summer, but we were hanging out in Chicago with nothing planned and realized the Dbacks were playing in Milwaukee.  We called the day before the game and lucked out and got pretty much the last handicap seats and they were even up in the area we wanted to try (434).  It was a Senior and Kid Day, so while the game was not even close to sold out the handicap sections were full. 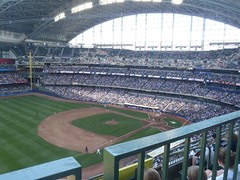 After the major rain delay at Target Field, Mik was not entirely up to the idea of another baseball game this summer until I reminded him Miller Park had a roof.  He was all for a Dbacks game, then.   I was also up for adding another ballpark to my MLB at Bat check ins.  Too bad that feature to the app came a year after our All the Ballparks trip, but surprisingly I do have 5 different ballparks now.

The game was overall great, especially with a lead off homer by the Dbacks and the Dbacks ahead most of the game.  Sadly, though the Dbacks lost with the Brewers getting a 3 run homer in the bottom of the 7th.  Even sadder was my Beat the Streak game streak got ended at 8 because Dbacks Stephen Drew struck out all 4 times at bat.  That is just an extra stinky way to end a streak.