Our final game of the trip and our last ballpark in hindsight was not the optimal way to end a trip. Seriously I should have thought of it and about half way through the trip I kind of realized that ending here probably was not going to be that great of an end, but it is still awesome to have finished the trip even if it was at one of the most blah ballparks. Actually, it barely can even be called a ballpark. It is only one because the Marlins do still play here, but it is very much just Dolphin Stadium (technically now Land Shark Stadium, but still says Dolphin Stadium in a lot of places) and as that it is mostly about the football team. It is not as bad as the Metrodome, but it is not the best of the football/baseball stadiums either, as that honor goes to the Oakland-Alameda County Coliseum.

The main thing that makes this not feel like a ballpark is that you walk off the elevator and onto the main concourse and the concourse is huge, as you expect at a football stadium. Of course, the expanse of empty upper deck seats all around give the same feel of it being way too big for the sport. The biggest down is that it really is deserted and shows that it is not for baseball.

There are few concession places open and way less than even at regular ballpark. That is partially obvious because they have a lot of concessions closed that only are for football season, but it is obvious that they do not need that many because the fan turn out is extremely minimal. Seriously, though, who wants to go to a game when the rain is often a possibility this time of year and if it is not raining it is miserably hot and humid. It was still humid tonight, but after the rain all day it was not as hot as it had been earlier this week for us in Florida, so surprising not too bad for an outdoor Florida game. However, it will be much better to go to a Marlins game in 2012 when they get their new ballpark, which they just broke ground for earlier this month. It will not only actually be built for baseball, but it will have a roof in the style of Safeco Field and Minute Maid Park.

There is a few good things about tonight's game and the main one is that it actually ended up being played completely with no rain delays. All day there were thunderstorms off and on up until only an hour before the game. I give the grounds crew and staff here big props for actually being very efficient and having the game start on time. So many parks do not actually have the top of the first start at game time and usually they are just finishing the pre game ceremonies and such as that time or the team is just taking the field to warm up for the inning. Here, though, they really did start the game at 7:10 with the actual first pitch to the opposing first batter.

One of the other good things was that it was actually a pretty good one. The pitching was not overall that superb, but the relievers did pretty good and for the most part it was decent. It was not a major slugfest, which personally I am kind of tired of, but there were some homers including 3 by the Marlins. The most exciting of the homers was the 3-run one hit by the Marlins starting pitcher. There was also some uniqueness of the Braves manager and catcher getting ejected. We never could figure out what they were arguing about, but I think it was that the catcher was called out at first on a double play and they thought he should have been safe.

Overall the Marlins game experience was pretty good, as the Marlins and Braves both have some good players worth watching. However, the ballpark experience is rather dull and makes it so obvious that the Dolphins do not want the Marlins here at all. For those that do not know the history between the two teams, the Dolphins own the stadium and told the Marlins back in like 2004 that they would kick them out in 2010 unless a ballpark is eminent. Not at the bottom of our ballpark experiences, as there are worse (Dodger Stadium, Skydome, Citi Field), but definitely close to the bottom. 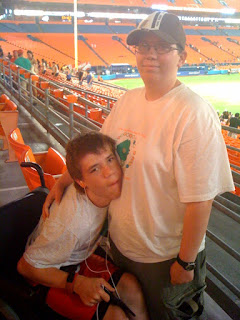 The final game of the trip is over (will post game wrap up soon). Mik is happy it is over. He is just ready to go straight home, though, but one last stop in Texas at friends and then he will be stop complaining on this road trip. I have a feeling he will enjoy Texas, though, he just does not know and we are keeping the reason a secret until then.

On July 23, 2009, before leaving Arlington, Texas, we went back to the Rangers Ballpark at Arlington in order to see the Legends of the Game museum they have inside the ballpark. The museum has three levels to it and is actually got a good amount to see, however, a big portion of it is just stuff from the Cooperstown National Baseball Hall of Fame and Museum collection and seems to be a lot of lesser known players with not enough info to understand why they put the person’s stuff on display other than they did play professional baseball. Come on I got to imagine they can come up with one interesting stat or thing each player has done even if it is not record breaking or overall historically important.

The first floor of the Legends of the Game Museum was mostly things on loan from the National Baseball Hall of Fame in Cooperstown. There is also a small theater area that honors Sammy Sosa hitting his 600th Home Run at Rangers Ballpark at Arlington, which was a game that he was a Texas Ranger in against his old team the Chicago Cubs. They have several items on display from this historical game including a base and the line up card. The video of his home run and the celebration afterwards continuously plays in this area. One of the walls also honors the other members of the 600 Home Run Club.

Personally I found a lot of the Hall of Fame stuff on the first floor boring. It is basically just like visiting Cooperstown, but it does not have the history of baseball or the actual hall of fame plaques that are the main things good about the real Hall of Fame. It is not bad if you cannot get to Cooperstown, but it is kind of boring after having seen Cooperstown. They do have a few interesting things, though, such as an original ticket booth from the Polo Grounds in New York City and Babe Ruth’s 1921 King of Swat trophy. They also actually have some items used in the Negro Leagues to look at, which is the opposite if Cooperstown, which does have a whole room devoted to the Negro Leagues, but does not have much in terms of artifacts on display. Thus I guess in some ways this place is better, but it also has its out of date flaws like the National Baseball Hall of Fame.

The biggest of the errors is that they have at least two places with North America maps with dots where the 30 Major League Baseball teams are located. Well, the map is at least 5 years out of date because it still lists the Montreal Expos as being current and not having moved to D.C. to become the Washington Nationals. The error about their not currently being a team in D.C. is also in the second floor exhibits about the Washington Senators moving to the Rangers and saying that no team has been in D.C. since. Being a Nationals fan I found it pretty insulting that they basically still ignore it existing and are too lazy to at least put a post it fixing the errors. It sure was tempting to get a Sharpie and mark the Nationals on their giant map.

Despite the errors in information related to baseball in D.C. I did enjoy the second floor. It has displays that basically tell the history of the Texas Rangers. They may ignore that there is currently a team in D.C., but at least they do not ignore that their team history begins as them being the second Washington Senators team that began after the first Senators left to become the Minnesota Twins. Of course, it is still mostly about the team’s time in Texas, but that is understandably how it should be since it is in the Texas Rangers ballpark. Also, as expected one of the bigger displays is devoted to Nolan Ryan, who finished his career with the Rangers.

The second floor has more than just displays about the Rangers organization. One of the areas shows the history of baseball in the state of Texas mostly focusing on the Texas League. They also have a ballpark exhibit that includes a look at the building of the Rangers Ballpark at Arlington with models of the stadium. They also have parts from other ballparks as part of the things they have from Cooperstown. This includes lockers from the old Crosley Field in Cincinnati and seats from around 10 old ballparks, such as the Polo Grounds in New York City, Cleveland Municipal Stadium, and Tiger Stadium.

The final part of the museum is an interactive exhibit area. Here you can get the feel of what it is like to catch a ball thrown by Nolan Ryan. This is just like the one at the Nolan Ryan Exhibit Center, but Dad and Mik missed that part, so they both tried it here. There is also several areas that quiz on different subjects and use baseball to help teach the different subjects, such as Math, Science, and Geography. Mik really enjoyed catching the ball from Nolan Ryan thing, which was nicely wheelchair accessible to roll up to.

Overall the Legends of the Game Museum was interesting, but the first floor was kind of a dull repeat of part of what we already saw a Cooperstown. The second floor was definitely the best part with the history of the Rangers and some things from various ballparks. The third floor is also kind of cool with the interactive things. Note the museum is accessible, but you will have to ask for help finding and using the elevator, since it is hidden and also does not always drop you off directly in the museum and it can be confusing to find your way back into the museum without help. I still do not like that they ignore the Nationals existing, but it is accessible and it was still worth seeing.
Posted by wildcat1001 at 12:57 PM No comments: