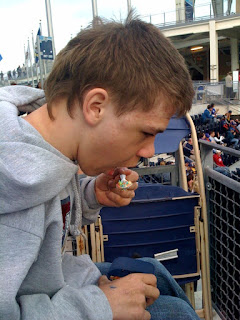 Game is just starting. We are in the All You Can Eat section, but Dad went and got Mik a fish taco as the trademark food and Dippin Dots in a Padres mini helmet. This section is pretty good. They even have veggie dogs as one of the all you can eat items.

Email ThisBlogThis!Share to TwitterShare to FacebookShare to Pinterest
Labels: Ballparks

The San Diego Hall of Champions was not even originally on the plan and we did not even realize it existed until we saw it across the parking lot from the San Diego Automotive Museum. One of the main sections of the museum is a baseball exhibit and the only other sport with a decent section is football. There are a several other sports represented, but most just have one little display each.

We pretty much just checked out the Baseball section since Mik was getting burnt out and obnoxious again. The Baseball section was pretty cool. It was mostly about the Padres and it was interesting to learn about the history of the team from being a Minor League to the current Major League team. It also had some interesting displays with Major League players with ties to the San Diego area, such as Ted Williams. It was actually a lot of fun to see this museum, especially since we did not know it was there.

Click the photos below to see the rest of the photos from this museum and today.

Today we had a lot of time before tonight's night game at Petco Park. Originally we thought of going to the Natural History Museum, but instead found out about the San Diego Automotive Museum and decided to go there instead. I figure we can easily go to science type museums a lot of other cities, especially since we get in free to a lot of them with our Field Museum membership, and the automotive museum was something more unique to do. Plus, I hoped it would be of more interest to Mik, but he is pretty much a booger no matter where we take him and rarely cares what we decide.

Dad and I at least enjoyed it. There was a lot of old cars that were cool to look at and of course photograph. I loved looking at the old scooters and motorcycles, especially the 1960 something Harley Davidson scooter and the Vespa scooter. Another cool car was Louie Mattar's Fabulous $75,000 Car, which is a car specialized to run constantly for thousands of miles including fueling up while still moving and changing tires while moving. For at least a few minutes Mik was glad we were on our type of road trip with lots of stops and not the week long non-stop ones this car has done. Mik did at least enjoy seeing the Ferrari and we saw 90% of the place before him being obnoxious and needing lunch.