All the Ballparks Plan

Now that the tentative 2009 schedules are out I have gone through them and come up with a plan for our All the Ballparks trip next summer. As of right now I have it planned that we see a game at every ballpark, but it is possible that some may get rained out, etc., so the possibility of substituting tours for games is still the fall back to see all the ballparks.

May 9, 2009: Drive from Tucson to Phoenix, see Cactus League Exhibit at Mesa Historical Museum, and 5:10pm Arizona Diamondbacks vs. Washington Nationals and Drive back to Tucson

May 26, 2009: Drive from Los Angeles to Oakland and 7:05pm Oakland Athletics vs. Seattle Mariners

May 28, 2009: Drive from San Francisco to Redwood National Park

May 30, 2009: Drive from Redwood National Park to Seattle

June 3, 2009: Drive from Bismark to Fargo, Roger Maris Museum, and Drive from Fargo to Minneapolis

June 4, 2009: 12:10pm Minnesota Twins vs. Cleveland Indians and Drive from Minneapolis to Chicago

June 7, 2009: Drive to Field of Dreams, Dyersville, Iowa and Drive back to Chicago

June 17, 2009: Drive from Cincinnati to Cleveland and 7:05pm Cleveland Indians vs. Milwaukee Brewers

June 20, 2009: Drive from Chicago to Detroit and 4:05pm Detroit Tigers vs. Milwaukee Brewers

June 21, 2009: Drive from Detroit to Louisville and Louisville Slugger Museum

June 22, 2009: Drive from Louisville to Pittsburgh

June 26, 2009: Drive from Niagara Falls to St. Marys, Ontario and Canadian Baseball Hall of Fame and Drive from St. Marys to Toronto

July 4, 2009: Drive through New Hampshire and Vermont and Stay in East Dummerston, Vermont

July 9, 2009: Drive from Philadelphia to Baltimore

July 13, 2009: Drive from Anderson to Royston, GA and Ty Cobb Museum and Drive from Royston to Cartersville

July 19, 2009: Drive from Fredericksburg to Houston

July 23, 2009: Legends of the Game Museum and Drive from Arlington, TX to Choctaw, OK

Today I went to the final Nationals game of the 2008 season. I was really hoping to actually see a live game, but the game ended up being canceled because of rain, which by the way was for the most part pretty minimal sprinkling. I did wait around for the two hours it took them to call the game canceled and watched the Cubs game, which they put up on the big scoreboard screen, but that is not as good as a live game. Oh well, maybe, they will let me trade the tickets in for 2009 game tickets or at least give me a refund since they certainly did not do anything. See my post about the rain out on my D.C. blog here.

Today I went to the Nats game with my mom since she could be here today, but will not be able to stay for the final home game of the season on Thursday, which I have tickets to. Today ended up being a good choice. For one, it was T-shirt Tuesday and I now have two Final Homestand of the 2008 Inaugural Season t-shirts. Secondly, the Nationals actually won. It was an overall good game and way more enjoyable as a Nats fan than Sunday's game. Read my full wrap up on my D.C. blog here. Also, click on the thumbnail photos below to see the whole gallery of photos I took at the game.

Today I went to the Padres @ Nationals game as the final game that came in my partial season ticket package. It was not a good game if you are a Nats fan like me, as the Nats lost 6-2, but at least they got on the board including a home run by Ryan Zimmerman. Plus, I picked up my free leftover promo item of a Panda Webkinz. Also, blogging from my phone worked out good. Anyways, I have a more full game wrap up on my D.C. blog here.

Click thumbnails below to see the whole gallery of photos I took at the game.

Padres @ Nationals and Testing Blogging from my iPhone 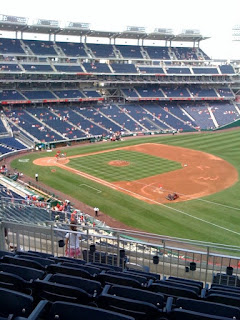 Today I am at the final Nats game part of my partial season ticket. I
decided it was a good time to see how well it works sending blog
entries from my phone since next summer of may be hard to post using
my laptop sometimes. Basically this is just a pre-game test post with
picture from my seat. Will probably post the post game wrap up from
laptop when I get back to hotel after the game.

Washington Nationals Picnic in the Park

This season I had Nationals Season Tickets, which my parents got me for my birthday last year. Today there was a Season Ticket holder event at the Nationals Park. It was not all that interesting, but there was autograph stations with pretty minimal lines and I got some autographs of some Nats players and the pitching coach. They also had photo stations, but I did not really care about waiting in line for that. I am definitely more excited about going to the Padres game tomorrow and the final home game on Thursday.