I briefly already posted about visiting the Play Ball Exhibit at Mesa Historical Museum in a post from my phone here. I mentioned our favorites, but it does not do the exhibit justice, so now that I have some more time as we drive back to Tucson I am posting a little more thorough of a review. Of course, more photos to come in the album that you can get to by clicking any of the photos above.

The exhibit starts out well rounded with a wall that is made to look like a wood fence with knotholes in it. When you peek inside each knothole you can see a photo of one of the current or past Cactus League ballparks. This is pretty much the only part of the exhibit that truly portrays the whole league.

The exhibit goes on to tell about the leagues history, but this is mostly done through just words and not much artifacts to go with it. Then it gets into the Cubs and their connection to Mesa and there is a decent amount of artifacts to go with that part including a clubhouse door from the Old Hohokam Park that is signed by Mark Grace. It makes sense the exhibit shifts to mostly focusing on Mesa since it is afterall Mesa's Historical Museum. Plus it is not like it entirely ignores the rest of the league. It just sort of over represents the Cubs and sort of downplays that the league once was a much more spread out thing, but I guess it kind of pulls it into the location that is now among the very central hub of the league in Phoenix.

Overall this exhibit was fun for all and I do think it does what it sets out to do, which is begin to display the history of the Cactus League. It certainly is not anywhere near all inclusive of the league, but there is hope as this really is supposed to be just the start with hopes for it being built into its own museum within 5 years. Plus having a Wii with a baseball only game (Backyard Baseball) definitely swayed Mik from being bored and playing his PSP to actually doing something at the museum.

Update 5/10/09: All photos I took at the museum can be viewed here or by clicking the photos in this post and viewing rest of album.

The first game of the trip was a great one in my opinion, as my team won. Mik was a little disappointed, but he really got into the ninth inning when the Dbacks scored 1 run and had a shot of winning. He mostly played his DS and PSP during the game, but in the bottom of the 9th he shut it off and even said "This is exciting." That's the best I could hope for, especially after his close to annoying complaining of wanting to leave as early as the 7th mainly because the Dbacks were losing.

Honestly, I did not expect the Nats to win, as they have not been great this season and I think today's win makes it the first time this season they have won three in a row and they still are the worst team in baseball. I also expected it to be a hitter's game with lots of run, which seems to happen a lot when the Nats are involved in a game. Instead it was an interesting low run game, although I would not exactly call it a pitcher's duel with the Nats starting pitcher, Lannan, walking about one Dback an inning and a decent amount of hits from both teams. Nevertheless it was a fun game to watch and a great start to the trip.

The seats we had in section 105 were not too bad. The scoreboard was kind of hard to see, but not impossible. The one thing that annoyed me a little is the bar in front of the handicap seats that are right in the line of sight for watching the game if you are short. It really is a poor design thing in my opinion, especially for those in wheelchairs that cannot really stand up and try to get that out of their view when something really exciting happens. Unfortunately, that is pretty standard for handicap seating as far as I have experienced. Of course, Mik does not mind, as he mostly played his video games and actually found he could lean forward and get a good sight line below the bar. It is the only time I do not bug him for not sitting up straight. I kind of felt like this bar was a little higher than most other areas, though, because it never seemed to bug me as much. Or perhaps it is all the non-handicap seats I sat in last year at the Nats and got used to no people or bars in my sight line.

Besides the helmet sundae and Mik's meatball sandwich we had some other good food. I had a good veggie wrap and also had an interesting Green Apple Jolly Ranger Slushie. More on the food to hopefully come in the form of Mik's Food Review, which is a category I going to try to get Mik to consistently help post to or at least post the food scrapbook photos from this trip to.

Right now I am posting as we drive back to Tucson using the handy USB Internet thing for my laptop. It works pretty good, but not too great for trying to upload a bunch of photos, so I will get the rest of the photos from the game uploaded later. I will try to remember to update (here or a new post) when I do, but the photos will be uploaded in the album that can be seen if you click the photos in this post.

Now just 12 more days until the real road trip part of the trip begins. Today was just a small taste of the trip and I am totally excited for the actual trip begin. I sort of wish it was sooner, but then again there is still a lot I need to take care of at home before we hit the road for two and a half months.

Update 5/10/09: The photos I took at the ballpark and the game are now all uploaded here. They can also be seen in the album you get to by clicking the photos in the post.
Posted by wildcat1001 at 9:17 PM 1 comment:

Waiting for Game to Start 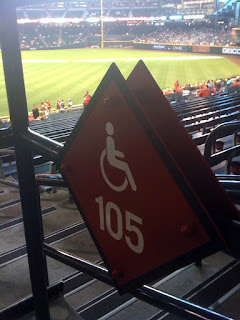 We got to Nats @ Dbacks game way early. We even got the gift shop shopping out of the way before they closed to prepare for opening for the game. I got a cool baseball that has a street map of Phoenix downtown marking where Chase Field is. Mik has probably 5 or more Dbacks mini bats in his collection already, but he found a black one on homestand special to add to the collection. They also had some World Baseball Classic 09 stuff on sale. I got two balls and Mik got a mini bat from that section. Lastly I got a cool Chase Field postcard that has spots on the back for putting the game info like final score. I am mailing that with a Take Me Out to the Ballgame stamp for my postmarked postcard collection.

The park finally opened at 3pm. On the way to our seats I got a helmet sundae. I am going to try to collect one from each team when we are at their ballpark. Mik already got a meatball sandwich, but we will probably have dinner later as we are still full from lunch at Sonic. Now we are waiting for the game to start. About another 30 minutes to go. 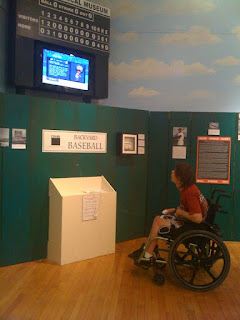 The trip has begun with the day trip to the Phoenix area. First stop was the Mesa Historical Museum to see the Play Ball exhibit about the history of the Cactus League. Mik took his PSP in, which I allowed as long as he behaved. He soon put that down, though, because I pointed out that they had a Wii to play. He sat and played Backyard Baseball on the Wii while Dad and I looked at the exhibit and a few other exhibits at the museum.

After lunch at Sonic we are now on our way to the BOB (i.e. Chase Field) for the Nationals at Diamondbacks game. I will post more photos of the exhibit and all the rest of the days photos probably tomorrow. Perhaps an update or two from the ballpark today, too.