During the Rays game Mik tried the chicken and fries. He thought the chicken was not that good and the fries were barely better. It was not as bad as Chik-fil-a, but not that much better.

Back on July 27, 2009, as part of going to the Tampa Bay Rays game at Tropicana Field we visited our 19th and final Baseball museum of the trip, the Ted Williams Museum/Hitters Hall of Fame. This museum once had its own home, but it could not keep in operation financially, so it is now inside Tropicana Field as part of the attractions. Because it was once on its own, it is quite a large collection and not very small like the Yankee Museum. It is even bigger than the Braves Hall of Fame. Also, it is free to visit on game days, although the gates open only 1 and a half before the game and this did easily take 45 minutes of our pre game time in the park. In case you are wondering why it is located at the Rays and thinking he never played or had any ties to the team, this is the area he retired to and in fact he threw out the first ceremonial first pitch in Rays history.

The museum begins with a few displays on the first floor. The displays include a Babe Ruth ball that is the only one Ted Williams ever asked for and was stolen and lost for over 25 years. They also have some random displays on things like the Negro Leagues, 500 home run club, woman’s baseball and the Rockford Peaches, Baseball Movies (even a Field of Dreams sign autographed by Ted Williams), and Ted Williams the Outdoorsman. It is kind of the hodge podge of stuff in the collection, but it is still mostly tied into fitting in the Ted Williams museum because it is a lot of memorabilia he collected over the years, autographed by him, or autographed to him.

The real museum, though, begins up the steps on the second floor. I honestly thought it was just a small hall of fame for the Hitters Hall of Fame when we began up the stairs, but was surprised to find that the upstairs is twice as large as the second with it mostly being about Ted Williams life and baseball career. I am not sure how you get up here with a wheelchair, as Mik did not want to go upstairs, but I imagine somehow one of the Tropicana Field elevators can get you access to this level and part of the museum, as it really is the bulk of what there is to see.

The Ted Williams part of the upstairs has items from his life from early baseball career in college to his time in the US Marine Corps to his Major League Baseball career and beyond. A lot of the displays include commemorative bats about the different parts of his career. Of course, there are also some actual bats he used. There is plenty to see and many signs to read about each display and the part of his life it is about, although due to wanting to get to our seats before the game started we kind of rushed through it. It is kind of sad that they do not open the park earlier because this museum would have been great to have been able to linger in and at the same time not miss any of the game. With it being in an indoor stadium there is not even ever the chance you could further explore it because of a rain delay.

The last part of the museum is called the Hitters Hall of Fame. This Hall of Fame features a variety of players including some that are actual National Baseball Hall of Fame members and some that are still current players. There is also a lot of lesser known/those that are not playing anymore and have not made it to the Hall of Fame. For each player they had a good size display of memorabilia related to them. It is so much different than the other Hall of Fames, as they actually have a display for every player in it and at least for now each player seems to still have their whole display still on view. It is not like there are only a few in it, either, but there has got to be at least 40.

Overall the Ted Williams Museum/Hitters Hall of Fame was an impressive museum/hall of fame. I just really felt like I was not able to pay that much attention to everything and really take it all in due to the limited time to see it before the game. It is a shame that they do not open the park earlier, but at least this museum does still exist and has not entirely disappeared, which very well could have happened, as it used to be in its own building in Hernando, Florida.
Posted by wildcat1001 at 5:41 PM No comments: 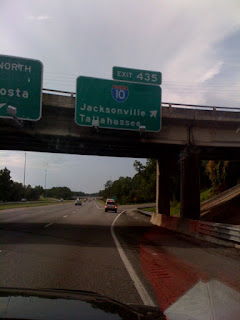 We just got on the I-10. It now really feels like the last stretch of the trip being on the interstate that we live less than 2 miles off of. It is not really the end yet, though as we are staying in Texas this weekend and the last driving stretch is not until Monday.

Email ThisBlogThis!Share to TwitterShare to FacebookShare to Pinterest
Labels: On the Road

On July 24, 2009, we visited the National Softball Hall of Fame and Museum in Oklahoma City. It is not exactly baseball, but it is a closely related sport, so I decided to make it part of the trip. Plus, I was a softball fan for a few years when we had a NPF team in Tucson. Sadly, though, that league apparently is not related to the ASA as nothing about the league is in the museum. However, softball in the Olympics did have its whole own room of the museum, which is really saying something because the museum rather small.

The Hall of Fame begins with a little bit about how the sport of softball was started in Illinois. It has some early softball items on display related to that, but after that the first floor gets rather boring unless you know about the softball players of the past. That is because this floor is mostly the hall of fame with circular plaques of players and others inducted into the Softball Hall of Fame. I had not heard of more than one or two in the hall of fame and it was sad to see how the place is upkept, as it goes as bad as seeing one guys hall of fame circle actually entirely missing while others looked ready to fall off.

The one part of the whole museum that I did enjoy was the Olympic room off to one side of the Hall of Fame. This room does have the upkeep issue of things falling off the wall behind the glass in some of the display cases, but it does have some cool things. They have a large display case devoted to the 4 Olympics softball was an event (1996, 2000, 2004, 2008). The top of each display case says what Team USA got (Gold for 3 and Silver for 2008). Things on display included team rosters, tickets from the games, signed softballs from the games, uniforms, and bases.

The museum also has a basement floor to it. It sure was not obvious how that floor is accessible for wheelchairs, but Mik did not want to be here anyways, so we did not even ask if there was some hidden elevator. By the way even finding a staff member to ask would not have been easy, as they were mostly absent including the gift shop mostly being unmanned. The lower level has some interesting stuff, but a large portion of it is just photos of teams and the only info is just names. They do have a college section, though, which includes items related to different championship teams including the University of Arizona.

Overall the National Softball Hall of Fame and Museum was not worth going out of our way for. Most of the small museums we have visited have been very worthwhile, but this one is on the verge of being a more big time one while it really is a neglected small museum. Many small museums are the ones you find the people actually passionate about it, but this one does not even have actual staff working other than the take the admission money or ring up your gift shop purchases. Actually that is the main staff role at all the small museums, but at every other one they are least at people that were friendly and/or interested in being there. Not even those paid to be here seem to want to be here and that seems to really say something about its quality.
Posted by wildcat1001 at 11:53 AM No comments: