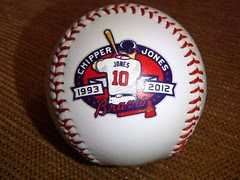 I did not even think of getting a baseball when we were at the Chipper Jones Number Retirement game because I remember them having nothing special back in 2009 when we went to Maddux's number retirement.  However, I guess because Chipper Jones was a much more major player for the team they did have merchandise (or they have learned from people wanting to buy stuff and there being nothing) including a baseball with an image of Chipper Jones and the years he was active/a Brave.
Posted by wildcat1001 at 7:09 PM No comments: 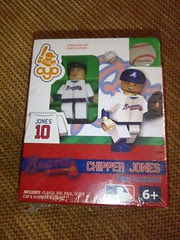 The Chipper Jones mini figure was the obvious choice for Mik to get for his mini ballplayer collection when we went to the Chipper Jones Number Retirement game.  It was from the generation one series that was released last year rather than this year's series and was overpriced at $20 vs. the normal $12.99, but it makes sense for his collection and there likely will not be another one featuring him and the other players/generation two figures may be around on another visit.
Posted by wildcat1001 at 7:06 PM No comments: 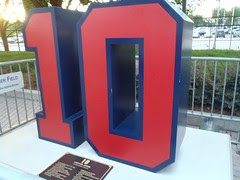 On June 28, 2013, we went to the Dbacks @ Braves game.  Mik wanted to go to the game as soon as he found out that the one time the Dbacks were in town at the new closest MLB ballpark for us (4 hours vs. when we were only 2 hours from Phoenix) was also when they were retiring Chipper Jones jersey (only one of Mik's favorite players that was never a Dback or a pitcher).  I put off getting the tickets for awhile since we did not know our flights for our Disney Cruise until late April.  Once I knew we would be back in barely more than enough time to get to Atlanta for the game I found the game sold out when I went to the regular online ticket buying, but when I clicked the accessible link and went through the chat process to purchase there were still wheelchair seats with the best available being in 229. 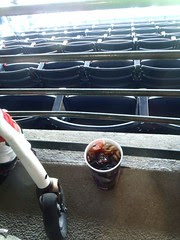 Not sure if the seats have been changed throughout the park since 2009 or it is just the 200 level, but they now have seats that can be folded and swung to the side out of the way every two or three spaces for the accessible rows.  That seems to be an improvement, but sadly still no cup holders and it is annoying with the regular seats in that section having them. 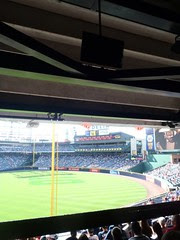 The view from our seats was not bad, but the scoreboard was partially blocked.  Mostly that did not matter, but during the Chipper Jones number retiring ceremony it was annoying to not be able to see what was going on on the field due to only seeing the bottom half of the scoreboard.  Since the row is raised up a good amount from the section, heads do not get in the way, but it also leads to it being mainly just an obstructed scoreboard view for the accessible row.  They attempt to fix this problem with television screens, but the one in our section was not on and there was nothing they could do about it (or even say that it was broken).  What is really sad is now that I look at the ballpark map, I believe we got seated in 231 and not our ticketed section of 229 and that TV worked. 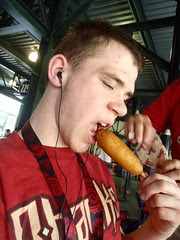 Mik was not sure what to have at the ballpark after referring to his post from 2009.  He considered some waffle fries, but he wanted something more than that, so Dad and I walked to the stands near our seats to see what we could find for him to try.  We decided to get him a corn dog, which he ended up enjoying and did not need any waffle fries in the end.
Posted by wildcat1001 at 7:00 PM No comments: