Today was a fun day and best of all Mik was well behaved. We really did not go on that many rides, as we went in February and had recently done most of the stuff. We did do the normal going on Toy Story Mania twice, but we actually only rode Buzz Lightyear one time (well, technically two times around in a row since we almost always get that perk when Mik rides in his wheelchair on the ride). We had not been on the Sun Wheel in a while since it was closed in February and it actually is now Mickey's Fun Wheel while the roller coaster in that area no longer has Mickey on it, but rather a sun design. Personally I preferred the look of the other way around. I enjoyed going on it again, but it is basically still the same ride and there really is not much to easily see with the way the cage for the wheel is made.

We actually did not end up going on Indiana Jones, as Mik said he was tired of it. We did do Jungle Cruise, which has a pretty cool lift for the wheelchair to go on board. Only other rides in Disneyland we did were Matterhorn, Tea Cups, and Dumbo (I never tire of my favorite like Mik has tired of his). Other rides we did in California Adventure were Soarin' and Hemlick's Chew Train.

Yeah, we really did not do much, but we did what we wanted and had an early night for once since we got back to the hotel by 7:30pm. Tomorrow is another night game (Angel Stadium) and the day after is a 6 hour drive and a night game (Oakland), so the early night is great. At least with tomorrow's game we do not have to go far at all. We do not have to do anything before the game, but we might go see the Disney Christmas Carol Train Tour at LA Union Station. However, that is also in Denver when we are, so we could catch it there as something to do then instead. Hope to at least catch up on some postings from yesterday and today (including Mik's Food Scrapbook posts) tomorrow morning.

My ball from the Dodgers is not all that interesting to me, but Mik for once was the one that cool thing in my opinion. He got a Dodger logo bat with a flame design on it. They also had a cool gold colored mini bat, but he said the logo on it was bad (I did not get a close look at it, but perhaps it was the LA logo). The flame one had the good logo in his opinion plus the cool colors of the flame.
Posted by wildcat1001 at 9:36 PM No comments:

Yesterday at Dodger Stadium I got a ball that has a partial view of the field at the stadium. It also has the Dodgers logo with a baseball with stripes coming from behind it to show movement. It is better than no ball and in fact I do kind of like it, but it is not all that special and certainly would have entirely passed on all the Dodgers balls except this one is sort of of the stadium. The photo is just a rather odd view of just the outfield.
Posted by wildcat1001 at 9:31 PM No comments: 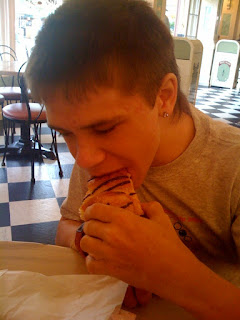 Mik is happy for Disneyland today. He says it is the only good day all summer. First thing at Disneyland was stopping for a chocolate croissant breakfast for Mik on Main Street, which is his favorite way to start a Disney day.

Next up is Indiana Jones and Jungle Cruise.