We got to Citi Field around 3:40, which was about an hour before the gates opened. It turned out to be one of the most boring parks to arrive early to. The outside is rather boring for the most part or at least looks pretty much the same on each side, so it is not worth walking around. The only interesting thing is the markers in the parking lot where the bases, pitching mound, and home plate for Shea Stadium were located less than a year ago during the park's final season last year.

The park opened around 4:40pm and it took about 10 minutes to get in. We entered through the Jackie Robinson Rotunda and the large 42 there is cool, but the rest is hard to look up and see from the bottom with the maze of stairs and escalators. Our first stop in the park was the team shop and that is when this park began to come across as worthless. The team shop was not even open and did not open until almost 5pm. I do not think it is too much to expect it to open with the park, especially since their website specifically says it opens with the park.

The whole feeling like in a park opened before the staff arrived continued when we got up to the concourse level and found almost all the food places closed. Not everything is, but the worst was getting up to our seats less than two hours before the game and Dad still having to go down to the main concourse to get drinks. It seems other than the main concourse outfield concessions pretty much nothing else opens until 1.5 before the game.

Our seats were not bad and I will give then credit for feeling like a modern ballpark in this respect, however just because the accessibility is good does not mean it is a good ballpark. Up until today it has always been the accessibility experience that has caused me to dislike a ballpark (Dodger Stadium and Rogers Centre). Citi Field, though, is just plain a waste. Not just a waste to go to, but a waste to have been built.

I do not know exactly what it is, but the best way I can describe it is that there is not anything special about it. The only uniqueness is a giant apple in centerfield, but even that is only raised up a few times a game (once before the game and 7th inning stretch, I also think for Mets home runs) and very briefly. There is no history to the park and at the same time no new modern ballpark feel. Honestly it feels like a disorganized run down park, which fits with the rather dismal playing by the Mets tonight.

If the game had any excitement, such as great pitching, lots of hits, or just a home team win, then it might not have been so bad, but nothing worthwhile happened. Sadly the highlight was the Dodgers' Manny Ramirez getting ejected in the 5th inning. Sure the Dodgers got a lot of runs, but two were walked in and several others got on base with walks. Plus most of the hitting was just singles. Oh, the game went on forever just because of everyone hitting tons of foul balls. Mik seriously thought they would run out of balls.

It did not help Mik wanted to leave since the bottom of the 2nd. He is back to being a total butthead now that we have done Fenway and there is nothing left on the itinerary he wants to do except see the new Harry Potter movie on the 15th. The lack of any sort of atmosphere (i.e. interesting things on the scoreboard or even just fans cheering for the right teams, as several seemed confused when to cheer or jeer) here almost made me want to leave early, but at the same time I wanted to stay because we had already made it through 21 complete games on the trip and I really think we should see a full game at every ballpark. Thus we toughed it out as the game dragged on and did see it until the final out.

I hesitate to call it the worst because there were some decent food options and the accessibility was not too bad. However, at the same time I would never go back except maybe if the Nats were playing. Toronto and the Dodger Stadium are still worse, as they are not worth going into for a game. This one is only barely worth it if your team is playing. Sadly it stands out as such a waste to have been built. Sorry, but I also do not accept it is just the kinks of the new ballpatk being worked out. The Nats and the Yankees have already proved to me personally you do not need until July of your Inaugural Season to have such kinks as disorganization and lack of ballpark created atmosphere (i.e. not the fans, but the scoreboard and sound stuff).

Update July 11, 2009: I finally got the Mets photos uploaded to the gallery here and added some to this post.

On July 5, 2009, we visited the Yogi Berra Museum on the Montclair University Campus in Montclair, New Jersey. I expected it to be a small museum and it is, but it is a surprisingly good one like the small Canadian Baseball Hall of Fame is. I really thought it would just be about Yogi Berra. That is the focus of the museum, however, it also gives the background history of the Yankees and to a lesser extent the Mets. In fact it is better than the Yankee Museum in the new Yankee Stadium.

The museum visit begins with displays on the history of baseball in New York. It mostly focuses on the Yankees, but it does talk about the time period when their were three New York teams (Yankees, Dodgers, and Giants) and the Yankees prevailed as the only one that still is in New York today, as the Mets came later. This part of the museum also has a little history of catchers from the use of minimal protective gear to the more modern improved padding and helmets. Some of the Yankee history displays include one of the bats Joe DiMaggio used during his 56 game hitting streak, a Babe Ruth signed ball, and the original Mickey Mantle and Joe DiMaggio plaques from the old Yankee Stadium’s centerfield fence before the 1970s remodel.

Intertwined with the Yankee history are parts about Yogi Berra, such as his growing up in St. Louis and his military service during World War II. Related to his playing career there are some his awards, such as MVP plaques and World Series rings. The bronzed glove worn by Yogi Berra when he caught Don Larsen’s perfect game in the 1956 World Series is one of the best items on display.

Some of the most interesting stuff, though, is related to the more recent closing of the old Yankees and Mets stadiums, which Yogi Berra went to both of. It was interesting to learn his connection with both New York teams. He mostly played with the Yankees, but played a few games with the Mets a year or so after him being fired as the manager of the Yankees. He then had a managerial career with the Mets.

Overall this is a great museum. It is not very big, but it does a lot more with its space than the Yankee Museum. If you want to go to a museum with Yankee history this is the place to go. Sure the Yankee Museum has all that World Series stuff, but this place still represents quite a few of the World Series along with the more general history of the team. Yogi Berra Museum is definitely a misleading name for the museum and really only refers to him owning it and starting it. It does tell about him as a player mostly has memorabilia related to him, but there really is way more to it and it is more of a New York baseball history museum.
Posted by wildcat1001 at 10:39 AM No comments: 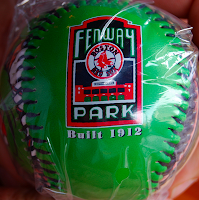 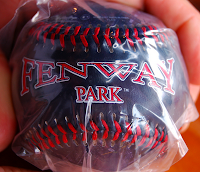 One of the two baseballs I got at Fenway Park is a blue baseball. This one says Fenway Park on one side and Built in 1912 on the other side. The other strip of the ball has a view of the field. It is different than many of the other balls of field views, as it shows the infield and not just an outfield view that could be any park since the Green Monster is also obviously there.