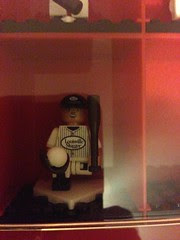 Dad and I had a hard time choosing just one mini figure for Mik's collection when we were at the Louisville Slugger Museum to see the Big Leagues, Little Bricks Exhibit.  They had several that were from the National Baseball Hall of Fame series and it was tempting to get those, but in the end we decided not to since we were not at the Hall of Fame and none of them were among the players Mik particularly favored.  The figure with a Louisville Slugger uniform made sense, though.

Earlier this month Dad and I were driving through Louisville and noticed a billboard for a LEGO exhibit at the Louisville Slugger Museum.  The Big Leagues, Little Bricks exhibit requires admission to the Lousiville Slugger Museum, which also includes the factory tour, but since we have done that twice before and did not want to add to much more time to our travel day we just saw the exhibit and the shop (had to get a new figure for Mik's mini ballplayer collection!).

The exhibit features models of several ballparks at different scales.  The largest model is of Wrigley Field.  The other ballpark models include Miller Park and PNC Park. 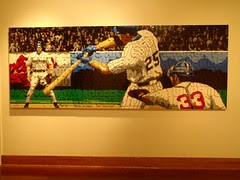 The exhibit also featured some LEGO murals.  My favorite was the one called Take Me Out to the Ball Game.  This features the lyrics raised as part of an image of a player at bat.  There were also murals of ballplayers. 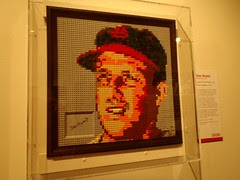 One of the more interesting parts of the exhibit was a display of bats made out of different materials including cardboard, glass, and, of course, LEGOs. 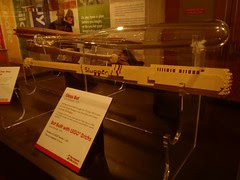 The exhibit also features LEGO models of figures doing different baseball moves such as sliding, pitching, catching, and hitting.  There is also an area to build your own LEGO creations. 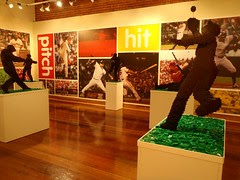