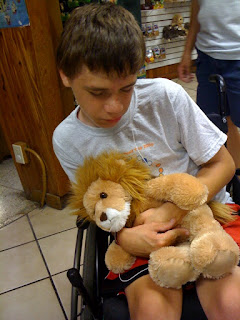 We are doing the Lion Country Safari today before the final game/ballpark of the trip tonight. Mik got a stuffed animal lion as his souvenir. He thinks it will go great with his cheetah.

Update from laptop 7/29/09: Mik is happy to have finally found a nice snuggy animal as a souvenir of this trip. He tends to like to get one every summer vacation. Several summers ago is when he got the cheetah at the Los Angeles Zoo and two years ago he got his Hard Rock D.C. bear that is his car animal. He had a chance to look at stuffed animals at the Georgia Aquarium and at some of the Build-a-Bears at the ballparks, but the lion was the first one he spotted that he imagined himself actually snugging a lot and he does not believe in wasting money on a stuffed animal if it is not going to get a good amount of snuggy time.