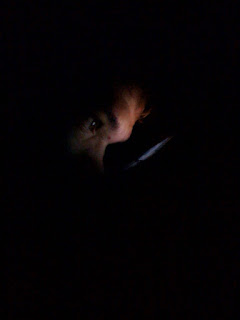 Afternoon and evening has been spent relaxing at the KOA. Internet access turned out to be intermittent and we eventually gave up. Dad built a fire and we roasted veggie dogs for dinner. Mik rates them almost as bad as a Dodger dog because they were the tofu pups brand, which were on sale. Should have just paid the $1 extra and stuck with the tried and true Yves ones.

S'mores were a hit, though. The IKEA brand chocolate turned out tasty. Mik even tried the dark chocolate and discovered he likes it. Mik mostly just watched his iPod while dad and I roasted, but he did roast one marshmallow himself. He would not let me take a picture. I did get one of him eating the s'mores, though, and will upload tomorrow, as I am hoping for good AT&T Internet at least when we get on the I5 to Seattle.

After Dad washed the dishes we went up to the Rec Hall, so Mik could charge and watch more NCIS on his iPod. While he did that Dad and I played some ping pong for about an hour. Dad beat me every time, but I got close once losing 19-21. Maybe, there will be one at the next KOA and I can beat him then. At least I know I will challenge him again when we are at Grandpa Kjos'.

Now Mik and I are in the tent. He us watching NCIS in his iPod as seen in the photo in this post. Dad is packing up the car, so that it is just the tent stuff we have to pack up in the morning. We are going to try to hit the road by 8am tomorrow, as we do not want to get into Seattle too late and also want to stop at the Visitor Center in Oregon to take photos since Mik and I have never been to Oregon. Have not been to Washington state ever, either, but we know we will get plenty of photos in Seattle of us.

Email ThisBlogThis!Share to TwitterShare to FacebookShare to Pinterest
Labels: Camping