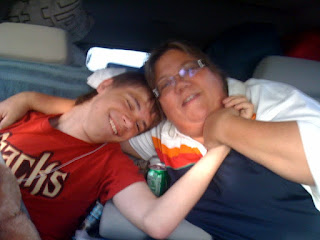 A few hours ago we picked Mom up in Houston to join us seeing old family friends in Texas this weekend and then drive home with us. Mik did not know about Mom joining us until she opened the door when we picked her up at the airport. It was really hard to stall the three hours her flight was delayed, but turns out he is so oblivious when he is playing his games or iPod in the back seat that he did not even notice we drove in a sort of circle around Houston or even when we had to take the second circle around the airport pick up. He still would rather be home with all his stuff in his room, but he is happy to see Mom after almost 2 months. The two of them are yelling/singing to Billy Currington's "People Are Crazy" song in the back seat now.

Email ThisBlogThis!Share to TwitterShare to FacebookShare to Pinterest
Labels: On the Road