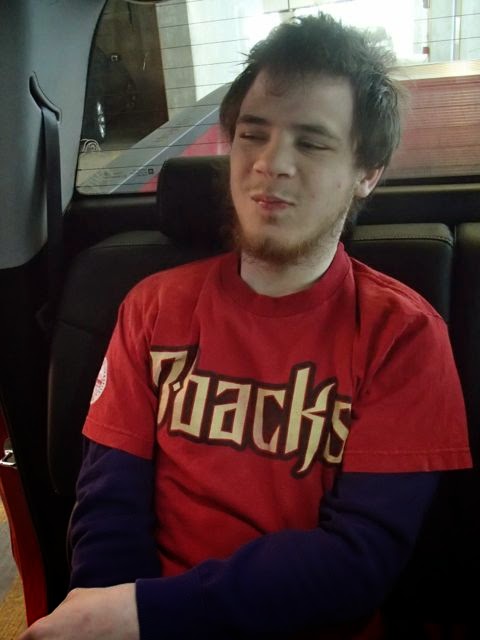 Since last fall we had been planning to go to a game at Wrigley Field during the 100th Anniversary season.  Mik choose that we go when the Dbacks were in town. We had settled on the Wednesday game of the series since Dad always has Wednesdays off and thus would not have to take as much time off to go.  I did not even realize until looking about when tickets go on sale back in February that we had decided on the actual 100th anniversary date. 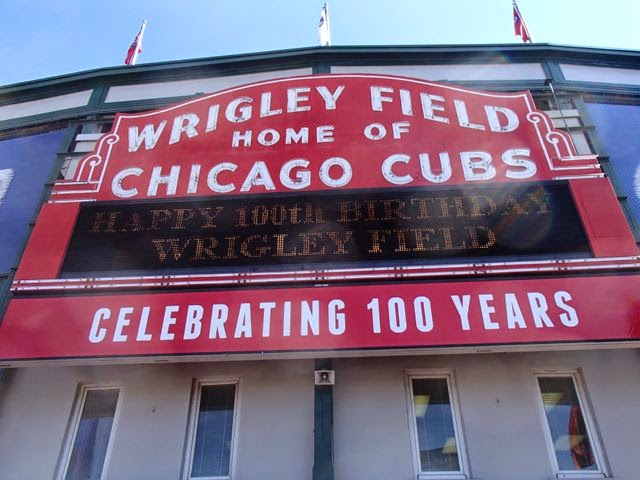 We left for the ballpark around 9 a.m. thinking it would be best to get there before it was crowded.  On the way Mik was a little hesitant about us ending up there too early, but in the end we were there by 9:30 a.m. and only a few people from the front of one of the lines in.  By the time we got in the ballpark and were walking up the ramps to our seats we saw the line wrapped around through the parking lot, so it was totally worth getting there early.  Plus, Dad and Mik got the souvenir shopping done at the Cubs store across the street to avoid the small crowded store inside the park. 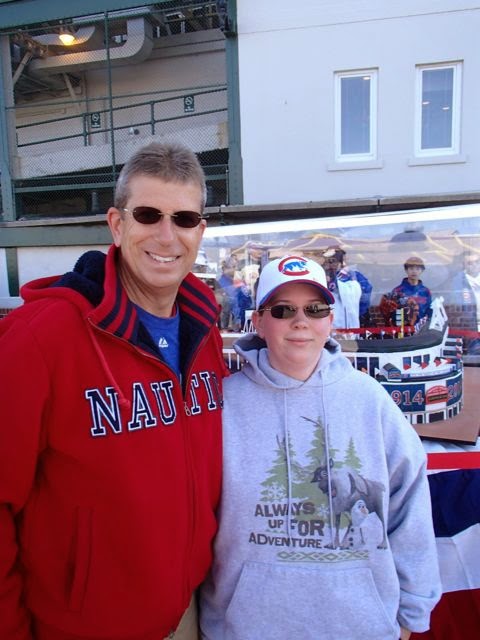 We also got to check out the Wrigley Field ballpark cake that was on display by the Ernie Banks statue, which was also dressed specially in a Federals jersey. 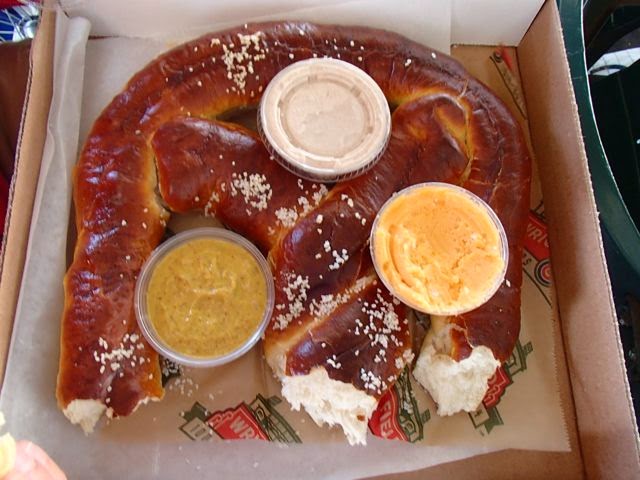 Once in the ballpark we got our favorite food in the whole MLB - the Northside Twist Pretzel. 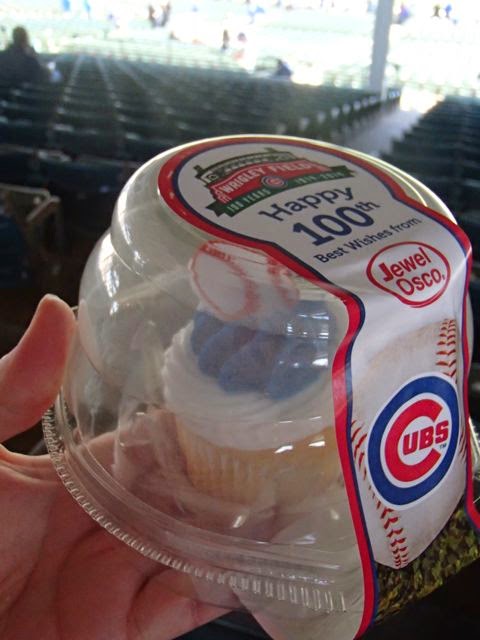 We also enjoyed eating the free cupcakes we got on the way into the ballpark. 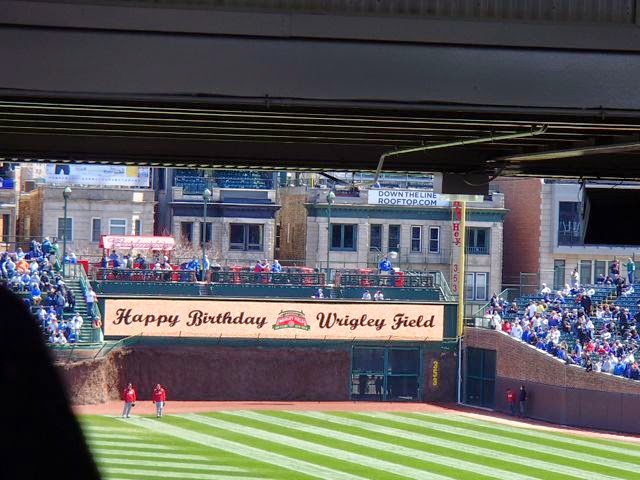 The weather was not so enjoyable, as it was in the low 40s.  Waiting to get in the park was not bad, as it was in the sun, but once we got to our seats it was cold.  We told Mik he just had to make it to the first pitch as his feet were already cold.

The pregame stuff was kind of interesting with some of the past players (football and baseball) going out on the field and a 1914 ball being used for the ceremonial first pitch.  The coolest thing, though, was seeing Bud Selig.  No, not seeing him down there on the field.  After the pregame ceremony, he walked right by us on his way up to the executive suites.   That made up for us not being able to see the flyover from our seats. 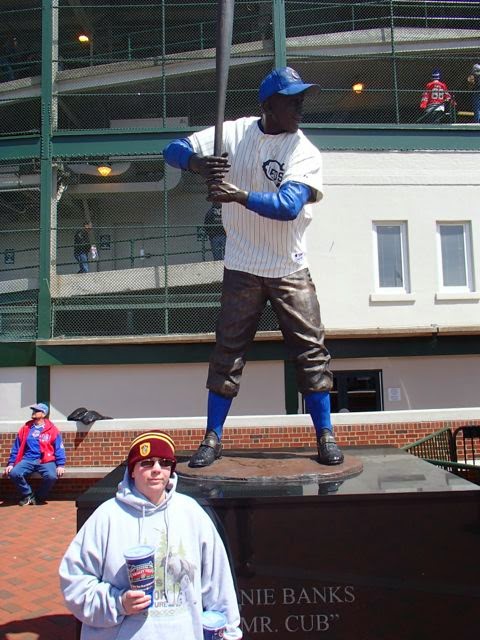 We left after the first pitch as promised, although I have to admit Mik did say he would stay as long as I wanted.  Really, though, he already knew I was also could and I was not going to go back on my promise that we could leave after the first pitch because it cannot be good for him to have his feet so cold when he cannot move around much to stay warm.

We ended up watching the game from the condo.  It was sad to not be there for the Happy Birthday in the fifth and the seventh inning stretch being led from the field, but we would not have noticed the balloon release from our seats.  Seriously, if not for the Bud Selig encounter, I would have totally regretted the seat selection as you also cannot see the scoreboard (the best part of Wrigley!) from the wheelchair row at the top of 208. 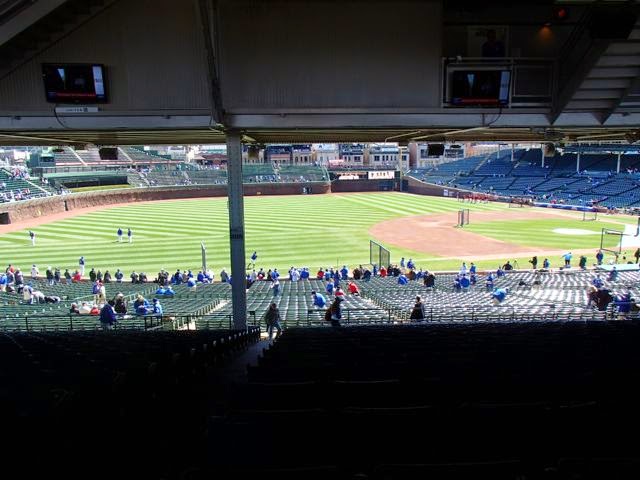