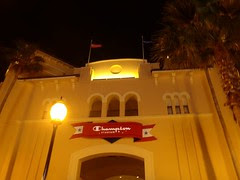 Tonight we went to see the Nationals play the Braves at Champion Stadium located at the ESPN Wide World of Sports Complex at Walt Disney World.  We were staying at Disney World, so we could have taken the bus transportation they offer from resorts to the ESPN Wide World of Sports, but Mik does not particularly like riding on buses and there can end up being a bit of waiting for them at times.  Thus, we drove from the resort and parked at the complex, which is at least free, although you can pay $20 for valet.  The lanes are clearly marked for disabled parking as you enter the parking area, however, there are not that many rows of actual handicap spots and like our Disneyland experience they always seem to be full and it is just a close to park/tram section of the parking lot.  Since we need the handicap space to be able to unload Mik, we just parked between two spots like we normally do when handicap spots are full. 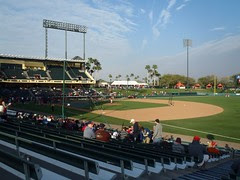 For the game we sat in section 104 along the first base foul line.  The wheelchair rows are nicely marked on the ground for each spot.  The ushers are good about bringing out chairs as needed.  They only allow you to buy one companion ticket and oddly our ticket for the row in front was for a space on the opposite end of the row and not right in front like we thought because the bleacher row starts with 1 on the right and the wheelchair row behind it starts with 1 on the left.  It did not end up mattering, though, as they had no problem bringing us two chairs and sitting together.  It is nice they enforce the one companion spot for the wheelchair rows while also being flexible to allow you to sit together on gameday when it is not crowded. 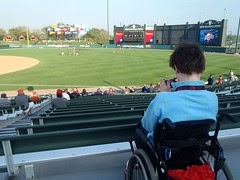 Overall, though, Mik quickly rated the accessibility low.  Mainly he did not like that the handicap section was not raised more than the typical row above the regular seating.  This meant that his view was easily blocked when people sat in that row.  Of course, he also did not like there being no cup holders, but that is something lacking at even some major league regular stadiums, especially when you sit in the bleacher sections.

Most annoying to him, though, was when there was a bunch of fireworks after the National Anthem.  He was totally ready for potential ones to go with rockets red glare, but he was pissed when there was a mini show of mostly really noisy fireworks after the anthem.  Between that and it being a somewhat windy and chilly evening, his opinion was tainted a little more than normal, so I think his low rating is not as low as he made it seem, although it really does make a big positive difference in enjoyment when the wheelchair seating at the top of a section is raised up more.